Sue Posted on February 7, 2014 Posted in News No Comments 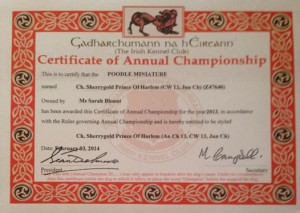 Absolutely over the moon to announce that Diesel is the Top Winning Miniature Poodle in Ireland 2013 and has been awarded the title of Annual Champion 2013 in accordance with the rules governing that award, and is now entitled to be described as Annual Champion 2013.  He is now Ir Ch Sherrygold Prince Of Harlem An Ch 13, CW 13, Jun Ch.  Well done and thank you Sarah Blount & Diesel for flying the Sherrygold flag on the other side of the Irish Sea last year.